Its a crazy and fun day to be a Tech consumer!!! Meerkat (launched last week in SXSW) and Periscope (launched today Mar 26th) offer live video recording making anyone into a TV broadcaster.
People are going crazy testing out video recordings while strangers watch, follow and send hearts. The videos range from dogs, cats, wife making soup, a girl offering to write any comment text in Chocolate as you watch, traffic updates, night sky view from many places round the globe, sleeping friends,.... I did a periscope of my garden and our dog and got 14 live viewers in a minute. (See montage of Day1 of Periscope below) 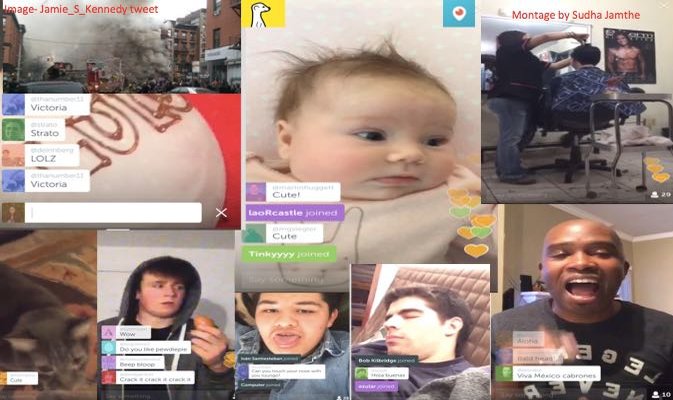 The funny one for me was this guy from Mexico who was talking non-stop and switched topic to whatever words we typed in comments. He was talking about bald head, dinosaurs as pet, and I said 'dry beans' and it was so hilarious to see him switch the topic and he said "Dry beans... Are ... Not Wet. The difference between dry beans and wet beans is ... moisture ...."


Products Innovating Live as we use it

Ruth Reader of Venturebeat has done a nice feature comparison between Meerkat and Periscope. I like having two options. Competition is good and will help drive good product features for both.
It is early early days! Periscope archives the videos for 24 hours while Meerkat does not. Periscope sends a stream of hearts allows us to click the hearts and the broadcasters line up hearts building a Leader board. Meerkat has a intuitive easy interface allowing us to find twitter friends to follow and I got 76 followers even before my first video but ran into crashes. Periscope got my video stream working right away after a minor audio hiccup. Periscope is now owned by Twitter so they cut out Meerkat's Twitter Social Graph access. Both have no parental control or ways to tag or access or search videos live or archived. Yet.
Both teams will iterate in typical silicon valley style (Meerkat is an Israeli startup) to understand who their real customers are what are the use cases to build upon.

1. Citizen Journalism On a serious note, a building explosion in NY injured 30 people today. Persicope video streams starting sending notifications live from the scene instantly creating so many citizen journalists. Ben Popper of TheVerge wrote about how he saw periscope live video of the fire and his thoughts on evolving citizen journalism.

2. P2P Video Communication In theory this is like Google hangout but with a super cool social interface. So people could use it for video communication of families, friends, events from around the globe. Meerkat looks like a video version of Snapchat as the videos are not archived but there is the added angle of 1 to many streaming adding interesting possibilities.

3. Real Time Events coverage/Activism We cannot forget the fact that both of these apps are riding on Twitter so the benefit we are seeing is all that we have seen and experienced on Twitter. Activism, Events live stream bring global news and communities together. People sharing live traffic updates etc are all common on Twitter now available in video format as the world is moving to videos.

4. Distance Education I am going as a judge to UCSC "Social Partners" class on Saturday and plan to live stream the students final presentations (hopefully students will be ok with it). Live videos of educational seminars, classes are low hanging fruits. Khan Academy was built on the backbone of YouTube, wonder if there will be a real-time version of it next?

The sheer diversity of possibilities and crazy ideas and being able to see the world from the eyes of so many others is the most fun, intoxicating part of this new real-time video broadcast from our mobile phenomenon.

Periscope founders in an interview to Product Hunt, the product launch site have said a developer API is coming soon. You can catch the periscope video of the interview for 24 hrs only from the interview link.
Katch, a service calling itself "record button for Meerkat" was launched last week at the heel of Meerkat which launch at SXSW. You don't need to download a separate App. If you include the words #katch in your Meerkat video titles Katch picks up the videos from Twitter feeds and automatically uploads and creates a Youtube video. (Note -This katch app is different from the Saas Ad platform Katch.com)

Nostalgia
Do you remember Qik, they came up with the same concept of real time video recording on iPhones before iPhone officially supported videos and allowed us to upload to youtube and several sites as an option. I used to have a channel on Qik and record local Silicon valley events and video interviews live. Qik sold for $100Mil to skype in 2011 and Skype absorbed the video cloud platform technology and shutdown the consumer app in April 2014. Qik connected to many different carriers globally and had amazing features like video between two phones and store recordings for live watch by followers on the web. Another one is justin.tv when Justin Kan built a camera he wore on his head and livestreamed his life and scaled it to a Y combinator company (also 2007).

Part of me is nostalgic but if you are someone who has seen the Phoenix like rebirth of technologies you will share my optimism that the Qik team must be using their learning of technology problems solved to create some other innovation and the new Meerkat and Periscope teams will do something different with fresh new minds and we as consumers will find some different killer apps aligned with times today.

Let me know if you have tried Periscope or Meekat, Share your thoughts and some use cases you see evolve.

I think this is attractive and eye-opening material. I am really impressed with your work and content. All the information you provided was very helpful. You made it very easy to learn. This post has given me a sense of feel right just the moment I have seen it. This is because there are many people who have already seen the posts herein and who have also given their view. I believe it is now the people’s turn to make their help about this post. Personally I found this post to be one of the nicest posts I have come across today. It makes me feel that I have visited one of the best sites. I hope that you will keep on sharing with us such nice articles as time goes on. Simply, I can say that this is a post that I foresee growing very fast in the future. The content in this post is hopeful to read. I am happy that I have seen this blog and have realized that it contains very helpful information. Hopefully the other readers have been involved in reading the post. If you want a real person for content manager you have to follow some criteria which really vital to pick the wise one. Not all can follow and come under that guideline. I came across your amazing blog while searching for the content writer. I really appreciate you to share the article with us here. I have been searching for best and cheap essay writing service. I couldn't wait to share my experience with all. One of the best writing services with more than 1400 native tutors still adding they have gained higher educational qualification from the reputed universities all over the world and they have been skilled and with higher experience they ensure all the work is well-researched and free of plagiarism.

This topic is very interesting and I am interested but do not know where to find, thankfully you create this topic. When you say, write my literature review, you want to know what a literature review is and how it works. Generally, it is a review of the currently published sources, which may come from journals, newspapers, and websites.