A Cone of Ice Cream leads to Community Innovation, How Sweet!

Friday night I joined StartupWeekend mixer at PayPal to pickup a cone of icecream from @treatbot (yes a tweeting ice cream truck).

I had been privileged to work with the StartupWeekend team to host them at PayPal campus and was ready for icecream, and ready for 150 geeks to come together brainstorm ideas, form teams and build and launch cool apps within the weekend.

Naturally, I asked Ryan who was at the icecream truck why he was asking for cash and not taking PayPal. He said he was waiting for the Ipad with 3G and wanted a point of sale app to accept Payment and would love it to be PayPal. What I did next led to a cascade of activities and here I am!


What did I do, I did what comes to me naturally! 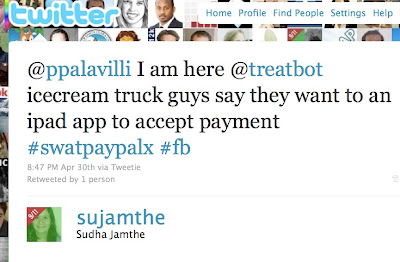 PayPal has a team of people who had volunteered to support the event on campus and got excited by the energy and decided to build their own app and were brainstorming ideas.

They saw the tweet and decided to build it. If a customer wanted it that is what they would build!

Here I am sitting at the final day demos. The PayPad was born here and here's the demo.

The team came together, learned Ipad programming, and built and thought through how to get a storefront for a customer on the Ipad.

Here's to you @treatbot!!! Are you ready to beta this?

It was a pleasure to meet you Sudha! We are ecstatic to be a small part of your inspiration to create this app. We look forward to crossing paths with you again very soon. I see this as making it very possible for small business owners to become tech savvy. It is groundbreaking if you ask me. Kudos and much love to all who are working on this creation.

Found your blog. Very interesting posts. I am with Opson, Inc. in Santa Clara working on several Social Media projects. Let us connect sometime. My email is rana at opson . com.

Ask your Pandora Jewellry banker for data about the breast blight bead. All profits go to the charity. Why not acquirement a breast blight bean and advice exhausted blight addition way. I was watching a contempo adventure of Shameless on C4 if it became bright that the acumen that one of the characters was getting accustomed so abounding charms for her bracelet.

To select from is indeed significantly wide that you will find elaborate jewelry designs in addition to elegant and straightforward designs. pandora.Buying clothes for comfort can also be yet another practical factor. However, we have a pre-conceived notion that comfortable clothes are not usually stylish and cause you to be appear cool. pandora uk.Positive thing there exists Ed Hardy Clothing. These clothes, although stylish, come in lightweight and comfortable material - permitting individuals to move freely. pandora. A person word of advice-I would prevent acquiring any specific silver jewelry that's not sterling. Pandora Jewelry. Repelling any terrible ingredient during the heavy snow as well as nippy wind, it keeps toes warm along with dry anytime all through winter. ghd sale.Necklaces who have similar sized beads work effectively on tall women and chokers help decrease each side height. ghd straighteners.It truly is accurate cheap Ugg Boots provide method aficionados terrific in addition to broad possibilities to spice up their shows. rrncluding a white and pink compact mirror.ugg boots sale.Longer necklaces aid lengthen each side round or square faces.wedding rings Furthermore they add length when worn beneath the bust-line but above the waist.

This can be renowned now for the styles. The styles of Sabo are exclusive and loved globally. This jewelry possesses the honor of being thought to be most magnanimous present that you can at any time give.
Pandora Jewellery
pandora bracelets
pandora uk
wedding rings
wedding cakes
mother of bride dresses
wedding bride dresses
thomas sabo uk

This specific Earrings consists of not one but two factors, is the jewellery from Pandora style all the other stands out as the expensive jewelry of Pandora trademark.
Mulberry uk
Mulberry bags
Mulberry outlet

good article . I just stumbled upon your blog and wanted to say that I have truly enjoyed browsing your blog posts. In any case I’ll be subscribing to your feed and I hope you write again soon!
Regards
send flowers from uk to usa

I just wanted to leave a comment to say that I enjoy your blog. Looking at the number of comments, I see others feel the same way! Congratulations on a very popular blog.

Hey, there is a great deal of effective info above!

Very interesting discussion glad that I came across such informative post. Keep up the good work friend. Glad to be part of your net community.

Unknown said...
This comment has been removed by the author.
8:56 PM