When did I Endorse a Business on Facebook in their Ad? 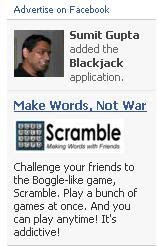 I came across two Ads with friend's pictures on Facebook Sponsored Ads in the past 2 days.

Hmm, Sumit seems to have added Blackjack App, which appears like a notification, but actually its an ad for Scramble Facebook App.

Still its all in the realm of Facebook App world right?

Now this is getting interesting!!!

In the normal web world, no company would create an ad with your picture without your explicit permission for an ad of their product just because they found you using one of their products!

I am curious to learn more on the user's involvement in these cases, but want to learn of similar such campaigns by other businesses and user views.

The promise of social media marketing, particularly facebook is to allow user's adoption of a product as endorsement of the brand to their social graph. But there were people who objected to Facebook Beacon. Wonder who else is using the power of such user's implicit endorsements?
Posted by Sudha (Su) Jamthe at 5:14 AM

This is just a start unless people seek out to end it early. Unlike Beacon, this is something that one can't opt out of.

Perhaps one way to stop it - and I doubt this would work - is to go after the companies that are actually using the ads. Meaning the Blockbusters, etc.

But yes, people are now appearing in ads without their prior knowledge or approval. It's the antithesis of permission marketing.

Now Facebook is trying "implicit permission" marketing, trying to provoke a response from my friends by showing my endorsement of a product I never even tried. If this continues the way it is, this will kill "permission marketing" because users will learn to avoid it and would not believe the ad.

I dont like the way this is implemented today. No wonder beacon experienced such a backlash. After having experienced how "I was used" (thanks Sudha for pointing out), I am now sure this will not work the way it is. It will evolve or it will die a painful death. I have ideas on how it can be improved, but I am sure so do many others. But today, I was pissed..

For example, this Louis Vuiton for man is an accomplished one.This multi-functional business portfolio, crafted in Nomade leather, is abbreviate and elegant. It is absolutely altered from that of the Monogram canvas which is awash over with LV brand as if you are cogent the blow of the apple that you are accustomed a LV bag loudly.