Its an exciting day today at work at Dash Navigation and my customer's world of Dash Drivers as Dash kept its promise to improve software and add features with an over the air software update to its first Internet Connected GPS "Dash Express".

I am not kidding when I say, I know of customers taking day off to experience the GPS industry's first ever over-the-air wireless software update and try the new features of MyRoute, Search Along Route and improvements of FasterFind and improved performance and new UI.

EVERYONE is talking about it - Gizmodo, TechCrunch, Engadget, CrunchGear,VentureBeat, Crave, JK on the Run, NaviGadget, GPS Review and GPS Tracklog ...

As someone immersed in customer conversations at the grass roots level daily, I want to thank our customers who spoke to us and led us to prioritize and bring them just what they wanted next.

Thank You! You Rock! 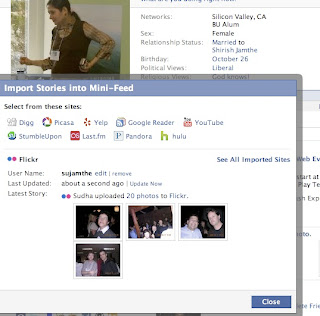 DEMO Party in SF rocked! ok, it was crowded, very crowded with 600 people! Thanks to Ramu of Qik, I managed to capture live videostream of parts of the event in a single click from a N95.


Rafe Needleman shared his nostalgia of how he was involved in the early days in 89 with Steward Alsop and had a demo story about being a repeat demo alum.


Brian Solis you rock! No one can capture more meaningful pictures and get them up faster on flickr on time Brian lets his pictures narrate who was there. I took some pictures, but mostly it was a blur of lot of people excited about DEMO.

Many had been there many times, some PR folks had taken companies to DEMO, some newcomers wanted to go there soon! Its phenomenal on how Chris Shipley goes around the globe and spots the winner companies and provides the fertile launch pad to succeed.

The beauty of the party was many many interesting conversations. I caught some on video as DEMO Stories that I am collecting for DEMO's facebook fan page. Ping me if we you have a demo story, the goal is to share our Demo experience on facebook and start some interesting conversations, you never know, something good will come out of it!
Posted by Sudha (Su) Jamthe at 4:45 PM 3 comments:

I am working on a project called "DEMO Stories" collecting real DEMO conference experience of alums to help new entrepreneurs. This goes on the DEMO Facebook Fan page. We have video interviews of Woody Benson and Julie O'Grady and podcasts in a yodio file there.

I am a DEMO alum from 2000 and have since taken two companies to DEMO, one as VP Marketing in Fall07, and another as startup advisor in DEMO08 . I blogged about last year's DEMO party.

Tonite is the 2008 DEMO Alum party in San Francisco! 600 people have signed up. You can follow DEMOtweets or watchout for the Qik live video streaming I plan to do for you!

If you are at the party and have a DEMO story as an entrepreneur, VC or Corporate Development person, I'd love to chat with you.

We have couple interns in Boston and Bay Area and can always add more if you want to do some DEMO story interviews anywhere in the world.

We all heard Dave Morin at the fb garage last week. Facebook has opened its platform as open source quietly in its own way here.

It is a lisenced under Common Public Attribution License (CPAL), which follows the Mozilla Public License (MPL) with the addition of allowing web services.

Over the weekend I played with Bebo and wanted to understand the comparison with Facebook platform to see if Bay Area Facebook Meetup would like to see a bebo demo about Facebook migration. Interesting enough I connected with my facebook friends on bebo and haven't heard back from anyone who logged back into bebo. Ok Dave McClure is busy with GSP East, what is everyone's excuse?

I wonder what is the impact for Bebo which has the same Facebook platform lisenced which is not opensourced, right after Bebo's aquisition by AOL. Is this another influence on Facebook's decision to opensource the platform?

What do you think as a developer? I'd love to hear your thoughts.
Posted by Sudha (Su) Jamthe at 8:48 AM 5 comments: